The Big Wave of Consciousness Awakening 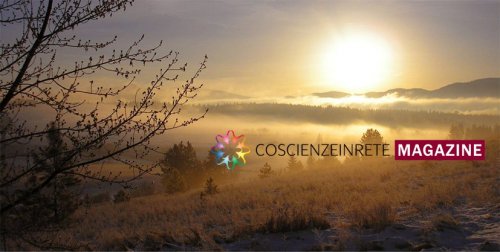 In our beautiful era, the era of the growth of consciousness, the main phenomenon is that of awakening.
Yes, the awakening of consciences.
Which is taking place at the global level in such a strong and accelerated way from a few tens of years
The awakening of consciousness is due to the fact that the heart, fueled by strong impulses of love, in a very vehement and clear way, began to say to many people that we can not only live for ourselves, preying on others and nature.
But that the good of all, including ours, is to equate the benefit of others, of Mother Earth and its creatures.
Finally masses, equal to about one-third of the world population, are beginning to apply the second millennium "love your neighbor as yourself."
Even apart from religious beliefs, ethnic background or social origin, or culture of origin.
This culture of conscience is made of freedom, which is the base. Because the lack of internal and external constraints allows every individual to hear the clear voice of one's heart joining a kind of thinking that tends to open up gradually to an understanding of the world and the meaning of life.

The ancient and obscure political, economic, cultural and religious control powers of the world, have a very strong fear of this wave in growth, because for the first time in thousands of years, the development of a huge critical and internally free mass, risks to create a new culture. This is a culture that is so alert and interested in the well that it is able to gradually dissolve the authority and influence of those who have always based their power right on the imposition of constraints of all types on the freedom of individuals.
A huge threat to the dark powers of the world, who have for years been a real emergency.

Many attempts to block the wave of awakening.
With specific forms of thought, with medicines, magnetic waves, chemistry and agriculture devitalizing, with the conditioning of political systems, with the creation of military and terrorist emergencies, with the formation of large bubbles, with the control of a predatory finance, etc ...
And then with the vertical of power.
For the lobbies, the covenants, the Freemasonry and the religious and chivalric orders that control the highest levels of society it is easy to get hold of the decision-making levels in national central bodies, but even more to successfully maneuver to control supranational bodies like the European Union, the UN, NATO, etc. ..

It is obvious that the wave of consciousness will gradually tend to occupy and "liberate" growing spaces in all areas, including political, economic, cultural, scientific areas... From the powers of manipulation. And this will happen as the movement of awakening will grow and organize. But it will not happen from the top down, but - as it already is beginning to happen - from local levels, horizontally.
The response of the dark powers to this natural and unstoppable horizontal expansion is in full swing. It expected to weaken the local levels, in order to remove possible tools to the movement of awakening, and subtract power to municipalities, provinces, regions, nation-states ... to entrust growing powers where it is easier for them to take control.
To the multinational levels: first of all the regional ones, such as Europe ... and then as final defensive of the fortress of power of a World Superstate.

So, the Italian political affairs fit perfectly in this framework: they are pushing us to transfer almost of our total sovereignty to Europe, and are changing our political class facilities and our local logistic, industrial, economic and social and political organization, so that they do little resistance to the process. And the power runs entirely in the hands of Europeans globalists. Tamed by financial crises, scandals, arrests, laws, propaganda, deviant forms of thought, etc. ...

For the movement of awakening it is early to think of reversing this situation: there could be the required critical mass, but this mass is not sufficiently aware of the context and the means at her disposal. She must concentrate on her maturation and dissemination of views.
Now we need to spread a culture of awareness devoid of hatred and full of love for others. A culture that does not remain "naive" and only interested in something else. But a culture that wants to deepen the various social issues and that horizontally spreads from the cultural point of view to practical actions.
Putting herself into play.