Not Only White Sugar - The Focus of Probios 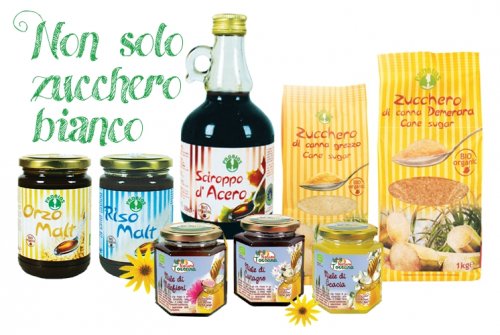 The term sugar refers to the category of carbohydrates or glucids, essential for life, as these are the main form of energy for the body. The functioning of the brain in fact mainly depends on a constant supply of glucose through the bloodstream, its storage as glycogen in the liver provides a real reserve to deal with physical and mental efforts.
Depending on their chemical structure carbohydrates are classified into simple and complex.
Among the simple sugars there are glucose, fructose, sucrose, lactose, which are abundantly present in nature in fruits, some vegetables and honey.
Complex carbohydrates are formed by the union of several monosaccharides and are mostly found in legumes and cereals.

The consumption of honey as a sweetener is the oldest, while the first extraction of sugar from the cane dates back around the thirteenth century BC in China and India.
In Europe, in 510 B.C. it was said of a plant from which a thick and sweet syrup was extracted, Alexander the Great spoke of it as a honey that did not need any bees.
In Sicily, the cultivation of cane sugar was introduced by the Arabs since 900 AD, but the sugar was for a long time a rare and precious spice in the hands of chemists and pharmacists who used it in syrups and preparations, only
the wealthy people could proudly vaunt its use as a sweetener.
After the discovery of America, the Spanish introduced the cultivation of cane sugar in those areas of Central and South that are still today the largest producers. A thriving import traffic developed, which
made the product more common and gave a significant boost to the culinary arts, allowing the emergence of European-style pastries. In 1575, it was discovered that if cooked the beet produced a syrup similar to that of cane sugar, very
sweet. But we have to wait until the start of 1800 when the economic need to replace the cane sugar with the beet sugar saw the rise of the first sugar factory in Europe.
Its lower cost compared to the one of cane sugar allowed larger segments of the population to approach the product, generating a considerable change in eating habits.

The history of sugar is completely normal up to here, so why was it necessary to find alternatives, reduce or eliminate refined sugar, the ingredient that is most widely used in the world to sweeten foods and beverages?
Which and how many processes undergoes sugar to get that white color and brilliance that characterizes it?
From the moment in which the "gravy sugary" is obtained from the raw material, it meets different and multiple cleaning processes to remove impurities. In these processes many substances such as carbon dioxide, acid
sulfuric acid and lime milk are used.
It is then subjected to evaporation to concentrate its juice; cooling, crystallization, centrifugation, filtration and decolorization with (animal) charcoal that allows you to whiten the crystals.
These are not a few treatments for a final product which in part from the caloric content does not contain any other nutrient!
In fact we can say that to be used by our body, sugar goes to draw on reserves of vitamins and minerals in our body such as calcium. Excessive intake of sugar can also create discomfort level in the intestine, in addition its ingestion, especially if in large amounts and frequently throughout the day, creates continuous blood sugar spikes that the pancreas tries to counter by entering insulin in the blood.

Despite various international bodies have rejected the demonstrable correlation between abuse of sugar and diabetes, obesity and decalcification, the dietary guidelines are clear: it is advisable to moderate the consumption of food and soft drinks during the day, it is better to consume complex carbohydrates while it is recommended that simple carbohydrates (sugars) do not exceed 10% of total daily calories!

Do not forget that the sugars are already present in many foods naturally!
For those who choose a “balanced and healthy diet” an alternative to sugar with chemicals sweeteners can not even be imagined as these are banned in the specification of the biological such as aspartame, sodium cyclamate or the like,
whose harmful effects are now known so that its use is prohibited or restricted in some countries.

But then how to make life sweet even without sugar?
Meanwhile, we say that it is about changing a habit. Like salt, sugar, having a very strong taste, intervenes on the taste radically and disguises the aromas and flavors of natural foods.
Fortunately there are many other foods made with all-natural methods that can be used to sweeten foods and they provide useful substances to the body instead of white sugar which is devoid of these substances.

Let’s discover some of them:

For millennia it has been the only sugary food concentrate which was available. The first traces of man-made beehives date from the sixth millennium BC.
Honey is produced by the bees on the basis of sugary substances that they collect in nature: the nectar of flowers and a derivative of tree sap, honeydew. In honey there is a discrete presence of trace elements such as copper, iron, iodine, manganese, silicon and chromium (especially present in honeys darker), B group vitamins, A, CK and enzymes.
The sugars are present in varying amounts but on average around 72%, fructose is the most represented sugar in honey. Its presence gives the honey a higher sweetening power compared to refined sugar but also a source of energy that our body can exploit longer. Indeed, to be used, it must first be converted into glucose.
Be careful, it is clearly important that this does not undergo heat treatment that would destroy all the valuable nutrients of which it is rich. It is suitable for spreading on bread, add to yogurt and drinks while it is not suitable for the preparation of desserts because cooking tends to harden the dough.

The brown sugar does not undergo any proceedings like the ones of white sugar; it is directly obtained from the juice extracted from the crushed cane from the tropical plant Saccharum officinarum by artisanal operations, without
the use of chemicals and with natural processes.
It has a crystalline texture, its color varies from golden to burnished in close relation to the residual molasses since it does not undergo whitening with chemical solvents. The cane sugar is suitable for the preparation of sweets and also to sweeten beverages.

They are obtained by germination of cereal, have a good content of maltose and essential amino acids, in addition to mineral salts such as potassium and magnesium.
The barley malt is made from barley before cooking in water before germinated and then dried, it has a distinctive flavor and less sweet, while those of rice and maize have a more delicate and neutral taste so that they can be used in beverages, in which they perfectly dissolve thanks to their water solubility.
Most experts and experimenters can also use them in the preparation of pastries.

https://www.probios.it/prodotto/423/
MAPLE SYRUP
The sap of maple (Acer saccharinum), was used by Indian Canadian tribes who already knew its processing in antiquity.
The sap is collected in early spring (usually in March or April) when the tree which is grown primarily in the eastern provinces of Canada and in some areas of the United States, is in a dormant state. The sap is largely made up of sucrose but also contains malic acid, calcium, potassium, iron, vitamins and phenolic components; has a caloric content lower than sugar.
For its re-mineralizing action its use as a purifying beverage is now famous and is prepared in the seasonal changes.
Its cost is quite high compared to other sweeteners, but this is justified by the fact that to get a liter of syrup it takes 40 liters of maple sap!
Depending on the type it can be used in the production of candy, to sweeten beverages and to accompany the typical Canadian pancakes or our national pancakes!

And more ...
There are also other natural sweetener songs such as:

- The agave juice, made from the sap of the blue agave from Mexico where it comes from, is presented as a more fluid liquid honey with a versatile use;

- Amasake, natural sweetener that is obtained from the germination of white rice widely used in Asian cuisine.

- We focus also on Stevia rebaudiana, a plant that comes from South America, whose dried leaves are used. It is rich in sucrose, has a very high sweetness even though it has a licorice aftertaste.
In 1999, the Scientific Committee of WHO and the Committee for food of the European Union, indicated that steviol a metabolite of the plant, could have carcinogenic effects and its use was banned. In 2004 the carcinogenicity of stevia was denied and it was reintroduced with a limit set by FAO and WHO of a daily dose of 2mg/kg body weight. This restriction has increasingly assigning to this natural sweetening cante to those of synthetic origin.

So we have many varieties alternative to white sugar, many of which can provide energy and maintain continuous and steady blood glucose levels almost uniformly, without straining our organs forcing them to work overtime.
If we get used to abandon the use of refined sugar we will reappropriate the flavors of the food and we will realize that life is not so bitter .. even without sugar!