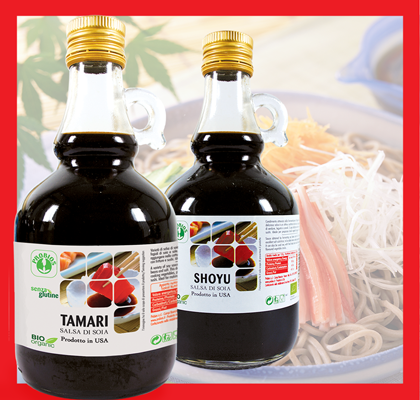 I asked the store of organic food, that I attend, abotu the soy sauce of Probios and I have been proposed two types: shoyu and tamari. They have two different types of use?

Shoyu and Tamari are two types of soy sauces considered one of the most popular seasonings in Asian cuisine.
They derive of the fermentation of soy and are used for seasoning and flavoring grains, vegetables and legumes, and more rarely in cooking raw.
The shoyu has a lighter flavor and contains wheat while the tamari has a stronger taste and is made with only soybeans and salt, that offers Probios is also gluten free guaranteed.
The type shoyu soy sauce, made ​​from yellow seeds of soybean and toasted wheat, is typical of Japan; the tamari type, made ​​only from yellow soybeans, however, is the most typical Chinese soy sauce but it is also traditionally used in Japan.

In both cases, the soybeans are steamed and the grain is roasted and crushed. The ingredients are well mixed and salt is added.
The fermentation period differs depending on the country of origin: in China it's a few months while it may take up to a few years in Japan, where is produced the best quality soy sauce.
According to tradition, the fermentation is done in a cedar barrel and it's made by inoculating certain species of fungi, called "koji", which belong to the species Aspergillus oryzae or Aspergillus sojae. At the end of fermentation, the sauce is pressed to get the liquid, and then filtered, often even pasteurized before the bottling.

Shoyu and tamari contain numerous enzymes, which according to Eastern tradition favor the digestion and the development of intestinal flora. For centuries they have completed the supply of the Oriental peoples, mostly vegetarian. They are also widely used in macrobiotic cooking, both as a condiment and for the preparation of beverages used as remedies for certain physical ailments.