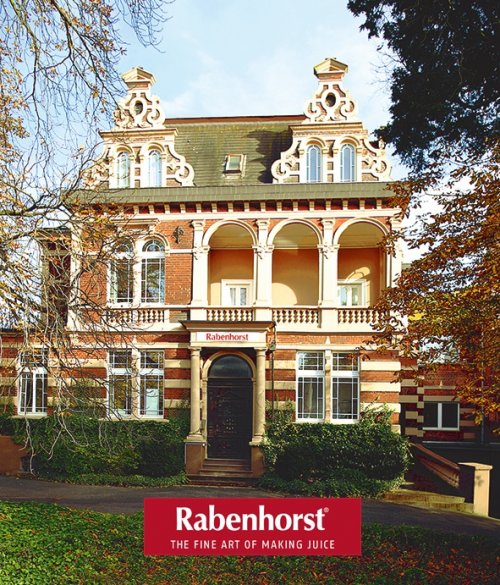 In vinum veritas - in wine there is truth.
And in the case of Haus Rabenhorst it is the beginning of a tradition that dates back 200 years.

The success story of Haus Rabenhorst began in 1805 when the priest Johann-Heinrich Lauffs founded a vineyard in Oberwinter, in the west of Germany.
Oskar Lauffs 80 years later, moves the company in the premises of Unkel on the other side of the river where "Haus Rabenhorst" still is. In 1898 Lauffs Alexander began producing "non-alcoholic wine" through the pasteurization of grape juice that rose to prominence in the market "Roter Rabenhorster", whose conservation was the direct result of the discoveries of Louis Pasteur.
In those years, the advent of non-perishable fruit juice represented a real innovation, it was the basis for Haus Rabenhorst, becoming nowadays one of the leading companies in the production of high quality fruit juices.

The family Lauffs is still the owner of Haus Rabenhorst, now flanked by a team of external management.
For over 200 years Haus Rabenhorst has specialized in the production of fruit juices of high quality, premium quality. The team of experts carefully select the ingredients and, with the same attention, are dedicated to the delicate pressing process that takes place in the press inside the establishment. To preserve the authentic taste in the juice and keep the characteristics of the plants, the fruit is introduced into the production system only at the right time.

THE FLAGSHIP OF THE COMPANY: HOW WAS THE APPLE JUICE HAUS Rabenhorst BORN?

The time of harvesting and pressing of apples Rabenhorst reaches the end of the summer, when the apple trees are full of juicy local fruits; at this time you can see a rich activity and the whole area is transformed into an oasis of fragrant apples, which spread into a unique scent. Every day at least 4 canuib (25 tons per load) of apples are collected and each delivery is subject to strict controls by the staff Rabenhorst.
The apples are harvested in high heaps and with the help of a jet of water are cleaned and subsequently pushed into a channel of spring water; in this way they are transported to a filter that makes them free from impurities and the excess material, such as leaves.
Subsequently, with the help of a conveyor belt they are subject to a last manual control and ultimately destined for the grinding mill to be chopped and stored for a short period before being squeezed. After pressing the apples are carried out for laboratory tests on color, flavor, taste and the precise determination of the sugar, acidity level and content of vitamins. Apple juice can be produced only if all the values are in accordance with the strict guidelines of Rabenhorst.
Some of the juices are bottled immediately for sale, such as apple juice naturally not limpid of Rabenhorst. The remaining juice is stored and used for the preparation of tasty blend of fruit throughout the year.
Through a process of special pasteurization, juice can be stored without the use of preservatives; the heating of the juice to the lowest possible temperature (80-90 ° C) prevents the fermentation and the filling system fails to minimize the effects of heat and oxygen on the product. In this way, color, flavor and aroma, and most of the valuable vitamins, minerals and trace elements are preserved.
Every year Rabenhorst tranforms inside its establishment, about 2,000 tons of apples in delicious organic juices.

For the company, sustainability is very important: the entire workforce strives daily to preserve the environment for future generations. This includes the reduction of waste and, where possible, recycling. A positive example is the use of apple pomace remaining after the pressing, sold to farmers as animal feed.

The typical cultivation of fruit trees in small local groups that can be seen in this area of Germany dates back to the Middle Ages, when people were planting fruit trees on land and fallow fields for their own consumption and the trees grew in small clusters.
These orchards called "scattered" are particularly favorable habitat for many plant and animal species.
Unfortunately, this particular type of cultivation has been abandoned in recent years and are now considered natural habitats in "endangered," however, they are vital for the preservation of biodiversity and landscape of the area.
Haus Rabenhorst works to preserve and support the small farmers who still use this traditional method for growing apples, supporting for example, the fusion of different realities, helping them to obtain organic certification in these projects.
The crop is bought from the Rabenhorst at the fairest price, encouraging small farmers to continue to grow their crops and to protect the "scattered" orchards that give rise to a incomparable quality of apples!