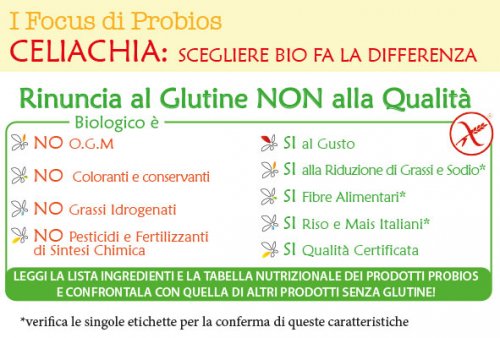 Celiac disease is a disease that today is known by most consumers and there are now so many products on the market dedicated to this particular area.
For those who still did not have a close encounter with this problem, celiac disease is a disease closely related to food: the body of many consumers, in fact, is not able to tolerate gluten content in various foods such as wheat, barley, kamut ®, spelled and rye, which if taken, even in small doses, causes severe damage to the intestinal mucosa and malabsorption syndrome.
The only treatment currently available is a gluten-free diet, basing your diet on grains that are free such as rice, corn, quinoa, millet and buckwheat (which is not a true grain, but that can be used as such).

The number of Italian celiac disease sufferers is increasing: it is estimated that about 1% of the population is celiac but, to date, only about 100,000 people have found they suffer from this condition; approximately 500,000 more people would suffer from celiac disease, without this has been diagnosed to them; in about 4 years, the number of confirmed celiac disease has doubled.
With some frequency, then, there is a link between gluten intolerance and other intolerances, for example lactose, egg, soy, creating many difficulties in finding products for the patient with these multiple intolerances.
The origin of the disease is very ancient: the first mention dates back to the first century AD by Aulus Cornelius Celsus, a Roman physician, who introduced the term koiliakos (from the greek "those who suffer in the intestines") to indicate who was suffering from these disorders. For the first definition of celiac disease as "intestinal malabsorption syndrome", we had to wait until the end of 1800, when the British physician Samuel Gee published his work "The Coeliac Affection," in which the possible therapy was first identified in a diet free of starchy foods. In the mid-900, the Dutch physician Willem Karel Dicke definitively proved the role of gluten as cause of celiac disease. During the Second World War, Dicke observed an improvement of the conditions of his young patients who suffered from chronic diarrhea associated with intestinal malabsorption when, between 1944 and 1945, there was the so-called "winter fasting." Because of the conflict stocks of flour finished, and children who were his patients were fed with potatoes, bananas, even with tulip bulbs. When the war finished and they returned to a normal food availability, Dicke noticed a recurrence of the symptoms so that he correlated these with flour containing gluten.

The 900th was also the century of great farm selections; some scholars think that the incessant crossing of grain to generate species with high productivity, disease-resistant and with low ears (cheaper to collect) has led to the production of a cereal that, if on the on hand makes more, on the other hans is less tolerated by the body, that "rebels" through allergies and gluten intolerance, its main protein.

In the vast panorama of gluten-free products, the patient looks puzzled and sometimes dejected, convinced that his diet will be distorted by not tasty and unappetizing products. Actually, he soon changes his mind, finding great products from the organoleptic point of view, but what about the ingredients? The nutritional quality? And yet what makes these products so good, despite the absence of gluten?

The answer lies in simply reading the list of ingredients listed on the package (an operation we recommend as always, even to non-celiacs).
Here's what the conventional (non-organic) gluten-free products may contain:

FOOD ADDITIVES: These are dyes, preservatives, antioxidants, acidity regulators, thickeners, emulsifiers, flavor enhancers, stabilizers, and so on, not to mention the aromas.
In conventional gluten-free products the use of additivesis frequent and they perform the important function of giving consistency and firmness to products that otherwise they would not have, because deprived of the natural "glue" that is gluten. Only a fraction of these substances is permitted in organic products; these are, however, substances extracted from natural products such as guar gum, carrageenan, xanthan gum.

GMO gluten-free products are often obtained by using corn or soybeans as main ingredients. These are two of the crops at greater risk of GMOs (check the label carefully: it is necessary to indicate its presence when it is higher than 0.9%). In the biological use of GMO ingredients is absolutely prohibited, and companies regularly test to ensure that they do not enter into the production cycle.

HYDROGENATED FATS: their use involves an important improvement in the consistency: the hydrogenation are obtained with fats that remain solid at room temperature (more convenient to store) and with compact characteristics very similar to those of butter, which make the product substantial even without gluten. Hydrogenation is a chemical process by which polyunsaturated fatty acids are partially saturated, that in the human body increase the risk of cardiovascular disease.
In organic production they have never been allowed; instead of them ample space is given to noble oils such as extra virgin olive oil or sunflower oil with nutritional characteristics not even comparable.

Several studies on the nutritional quality of the products on the European market (for example, the study by Dr. Arendt, University College Cork, Ireland), showed the following average characteristics of gluten-free products compared to products with gluten: excessive use of fat (especially saturated fats, hydrogenated, trans), excessive caloric intake, excessive use of simple sugars (sucrose, common white sugar), excessive use of salt, deficiency of certain vitamins and some minerals, lack of fiber.

At the international conference on celiac disease, which was held in March 2012 in Florence, the unbalanced composition of foods for people with celiac disease was put under accusation, since they may lead to an increased incidence of diseases such as obesity, diabetes and cardiovascular disorders.

Choosing an organic product protects us from the abuse of synthetic chemicals in our diet. Reading the label carefully and evaluating the quality of the ingredients are necessary conditions for an informed purchase.
Once again favoring the purchase of a biological product makes the difference.