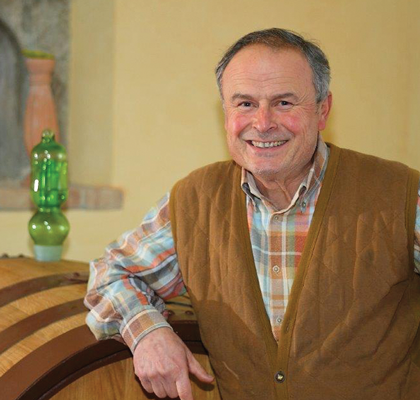 Meet the farm Carlo Tanganelli located in Castiglion Fiorentino in the province of Arezzo (Italy).

The company is engaged in agriculture for generations, with particular attention to the cultivation of vines and olive trees, plants of choice in this area.

It is currently run by his son Carlo Tanganelli, Marco, deep knowledge of the local who wanted to give a strong boost to the family by focusing on environmentally friendly products in a territory fortunately still intact: "Those who preceded me in the fifties , "explains Marco," began a real process of renewal of the few vineyards intensive present; the confirm , however, that it was necessary to maintain a precise address came in the seventies with the first evidence of the failures of cultural change combined with early evidence of disease in the Farmers (eg phosphate esters in the blood), due to the use of pesticides in our region ".

With this insight, the company has found its identity by continuing to follow the methods of cultivation thousands of years, adapting to whatever the current market was offering. The result was excellent: "We have guaranteed uniqueness and characteristics of products that would otherwise be lost, and that they were already good from the beginning" As the owner explains: "The maintenance of typicality is the only alternative to globalization, always more indiscriminated, and for the preservation of the land".

Even from an organoleptic point of view that gives consumers tastes and aromas that would otherwise be gone forever. "The help has also come from the maintenance of varieties typical of the region, Sangiovese, Trebbiano Toscano, vine cultivated by the Etruscans 4000 years ago, Malvasia del Chianti that now in areal very close to ours like-Cortona Syrah, it seems pure rural archeology".

All this along with the respect of the traditions (harvesting time and method of vinification) gave unexpected results in a world saturated with anything but wine.

In front of a person with so much experience, the question arises on the most disputed among the substances used in viticulture: the sulphites. "An approximate legislation encourages consumers not informed in major errors. In our wines, for example, we make extremely limited use of sulphites (in some wines they are absent), however, well below the limits allowed by law, our average utilization is less than 75% of the allowed limits, combined with filtration with pure cellulose and never sterils".
For years, manufacturers require clearer wording for the labeling of wines. "We wish to emphasize the legislative gap in the market because THERE ARE NO WINES WITHOUT SULPHITES! In my opinion it would be useful to introduce a statement that would allow you to declare wines without ADDED sulphates. "

Those who grow grapes for wine and/or table, in fact, use sulfur, and sulfur is as a pure element which combined, in contact with water or wort liberates sulfur dioxide, which will always be present in the form of sulphites in the finished product. But it is clear that this mode is very different from treating the grapes after harvest with sulfur!

The farm Tanganelli continues its way in the research: "Glad to share these our methods of cultivation, however, open to continuous evolution, much research in order to grow and improve the outcome for products that are more natural" is the thought to be left to whom  nourishes and respects the earth.