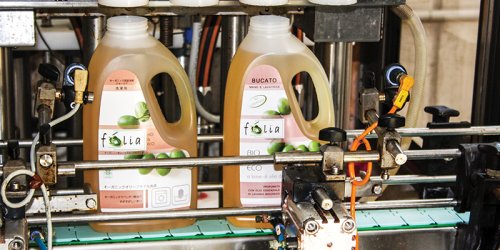 Pierpaoli is a company with a long history. Indeed, it was in 1939 when Armando Pierpaoli created in Senigallia a small business for the manufacture and sale of products of detergency. In these seventy years and more of history many things have changed and the last radical transformation began in 2005 at the hands of those who now represents the third generation of a company after all small and family run.
In 2005, one of the grandsons of Armando Pierpaoli, Giovanni Spinozzi, graduated in chemistry and once entered the company as technical director of the laboratory and sales manager since 1996, thanks to the simultaneous voluntary activities in a cooperative and supportive fair trade he had the idea to propose the creation of a line of hygiene of the person and detergents for home based on fair trade ingredients from organic farming.
The project was not that easy, and indeed it hasn’t been made yet. Not only they had to find some ingredients of fair trade, such as essential oils, to be included as such in the formulas, but also they had to create from scratch the raw materials that would allow to increase the presence of fair trade and organic ingredients in products. The turning point was the realization of surfactants based on an organic oil from a fair trade project in Brazil, the babassu oil. The project, which later took the name of "Talybe", saw the light of day and was also a great success: the first line, not only in Italy, of detergents and hygiene fair trade and eco-organic products became a reality and found itself in most of the "World Shops" in Italy. The project also became a keystone because, rather than remain an exception, it was the prelude to a radical choice that the company performed in 2008 by creating the Eco Organic Division; with which it has launched a radical restructuring of its business which provides the gradual shift from a production of conventional articles in ecologica, organic and fair-trade articles. Currently the production of Eco Bio Division represents approximately 35% of the total, the rest is made up mainly of professional cleaning and hygiene of the person, a sector in which the switch towards more eco-friendly is slow and problematic. The presence of Pierpaoli in the ecobiological field has primarily been characterized in recent years by a strong focus on research and innovation. To the "invention" of surfactants for the FT products did then follow the creation of new surfactants based on Italian oils, in particular those of organic olive and rapeseed, used in the formulations of eco organic products for the hygiene of the person and of the house. Another important aspect of Pierpaoli is the choice to certify their products. Indeed, unlike the food sector, regulated by public laws and regulations, in the field of cosmetics and detergents, there is no regulatory framework to protect consumers and words like "natural", "environmentally friendly" and "organic" are often used casually, so that the reasons why these terms are used are not clear. The certification, in particular Pierpaoli uses the ICEA, instead allows the consumer to know exactly what are the features of the products and ensures that a third party, other than the manufacturer, has verified the correspondence between the rules established by the certifying body and the product produced, and that the information provided to the consumer is accurate.
It remains to say that in the field of rules we are, however, in a phase of "work in progress" and that even with regard to the certification, and not only to the formulation of products, the search continues. Also here the role played by Pierpaoli is prominent. It suffices to recall the recent establishment of the European association of "The Greenway to Life”, officially presented in February 2012 at the BioFach, in Nuremberg, which brings together all the major European manufacturers of ecological detergents and is developing a new specification for the certification of these products , with the target of evaluating more elements than those considered so far and in more detail than we currently face. A certification that "The Greeenway to Life" is processing, which takes into account in the calculation of the environmental impact of a product also the distance traveled by the raw materials used to formulate the product and the means of transport, as well as the calculation of the fraction of the total natural and organic active ingredients. An element that is currently not considered by the different disciplines. Pierpaoli was one of the promoters of this initiative and Giovanni Spinozzi is currently in charge for the presidency of the association.
Finally, the company is also certified by the LAV according to the standard "Stop testing on animals". Pierpaoli currently, with a turnover of around € 5 million a year, employs 30 employees, all employed on permanent contracts, including 13 women and 17 men. Probios distributes two of the finest lines of production Pierpaoli, the line of hygiene and cosmetics "Sensè", dedicated to children and the line of house detergents "Folia".