Trapani Salt: a Passion to Grow 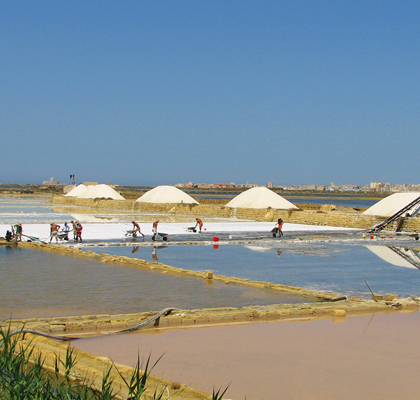 TRAPANI SALT: a passion to grow.

The salt pans of Trapani are found along the coast from Trapani to Marsala.
Built at the time of the Phoenicians, they are located along a coastal plain and mostly below sea level. In this area, the climatic conditions such as low rainfall during the summer, the presence of winds and high temperatures favor the evaporation of sea water.
The salt pan of Vincenzo Gucciardo is active since 1884, called moranella or chiusa, and is located within the "natural reserve of Trapani", managed by the WWF. Usually frequented by migratory species and periodic resident of the pink and gray herons, the salt pan is used only for ecological and bio-compatible products using natural elements such as the evaporation of sea water, the sun and the wind. Durinf the summer period there is the salt harvest that takes place with the rhythms and systems that remained unchanged over time. Both the collection and the packaging, in fact, are made by hand using traditional methods, and the salt is not chemically processed or treated, so it keeps all its oligomineral elements.

THE "CULTIVATION" OF SALT
Sea salt is obtained by the evaporation of sea water that is introduced into the salt pan through the so-called spiral of Archimedes. The work in the salt pan begins in March with the cleaning of salting tanks from the residues of winter. The water enters the first tank called the "fridda" and reaches a height of one meter and a salinity of 4 Beaumé degrees; then it passes into a second tank called "vasu coltivu" or evaporating tanks with a flow that is controlled by the expert hands of man. Here it reaches a salinity of 12 Baumé degrees. From here the water passes, again for difference of level, in tanks called “caure” or servants tanks, where through a serpentine path, comes to the fifth tank where salinity reaches 25 beaumé degrees or saturation point, ie the point at where saline water begins to precipitate the salt.
The cycle lasts from June to September. Weather permitting, the first harvest is made after 50 days from the beginning of the cultivation, the second after 30 days. The salt is collected by workers with shovel and wheelbarrow and placed in piles in “arioni”, namely in the area in front of the salt pans. In practice, every 45 days the salting tanks are drained of water and salt is put into small heaps inside the tanks and then with shovels and wheelbarrows placed in the arioni.
The only elements that come into play in the cultivation of salt are sea water and its mineral elements, the sun and wind that make the water molecules evaporate by increasing the salt concentration.
The sea salt (gray salt) is pretty tasty: a small amount is enough to salt food: the
presence of magnesium, potassium, iodine, fluorine, sulfur and calcium make it more soluble and rich in trace elements.

SEA SALT
The salt of the Natural Reserve of Trapani managed by the WWF is produced in ancient sal pans that faces the sea. It is harvested by hand and the process does not include refining, maintaining a higher content of minerals such as potassium and iodine.