The King of America: The Corn 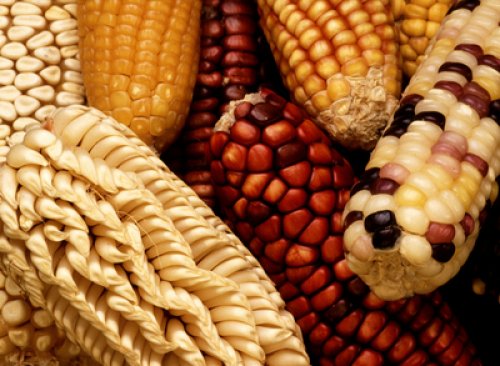 Maize (Zea mays L.) is an annual herbaceous plant of the family Poaceae, whose cultivation stretches from the tropical regions to the more temperate.
Maize is a staple food in traditional populations in Latin America, but also in those of some regions of Europe and North America.
In Italy it is consumed and cultivated mainly in the Po Valley and the Venetian plain: Lombardy, Veneto, Piedmont and Friuli Venezia Giulia produce two thirds of the entire Italian corn.

This cereal was discovered by Europeans a month after the discovery of America, in Cuba, where he was called maíz. The first rapid spread of maize in Europe took place in 1600 in the Balkan region, then part of the Ottoman Empire, thanks to the favorable weather conditions that ensured a good yield in production and perhaps also to the fact that this new agricultural product, not yet entitled, escaped taxation.
In Italy the cultivation of corn was, however, already widespread in the mid-sixteenth century, where it became the staple food of the peasants of the Po Valley until the late nineteenth century. This diet based exclusively on corn was the cause of most terrible endemic disease for the Italian countryside: pellagra, caused by lack of vitamin PP or niacin. For years, the lack of medical knowledge in relation to this disease, which is spread along with the spread of the corn, attributed the cause to toxic substances contained in this cereal.
The solution came by watching the Mexican customs, why did these people that consumed so much of this cereal did not get sick of this terrible disease called the three D, dermatitis, diarrhea and dementia? The answer lies in the ancient Mayan customs, they put them to soak before eating the grain of corn in "lime water", an alkaline solution that made "bioavailable" for digestion niancin vitamin and an important amino acid, tryptophan, which, in turn, converts into niacin.
Another curiosity linked to the onset of pellagra in the periods in which the corn was extremely consumed is related to none other than the vampire myth. Traditionally they are in fact beings that live in the dark, and sick of pellagra in fact they are hypersensitive to light because of the dermatitis that occurs with the disease, other symptoms that develop during the pellagra are aggression, insomnia, anxiety and dementia all symptoms that have contributed to the popular belief about the existence of vampires in Europe in the 1700s.

The not revealed secret of the Maya, and the subsequent resolution of the vampires’ enigma was not resolved before the first years of the ‘900 by Goldberger who linked this disease to a simple lack of food. Nowadays we do not have these concerns because the availability of food is so varied that makes the nutrients necessary for our well-being available through different foods.

For food use there are different species of corn used, some with a characteristic yellow color, richer in carotenoids or white color, but there are also species that are colorful ranging from brown, purple or red.
The most significant components are represented by nitrogenous substances such as starch and zein and zeatin which have a high content of essential amino acids. The seed is also rich in lipids, especially polyunsaturated fatty acids, vitamins (A, E, vitamin B1 thiamine), minerals, mainly potassium, phosphorus, magnesium, calcium and iron, as well as trace elements such as copper, zinc, and selenium.
In the tradition of Italy maize is mainly consumed in the form of polenta, which is commercially pure or mixed together with buckwheat flour (polenta taragna), it is also used for the production of popcorn, corn flakes, steamed and packaged in a "natural" way or used for the production of oil extracted from the germ, suitable for a dressing because rich in polyunsaturated fatty acids and the vitamin content. The corn is also used for the production of starch, syrups and sweeteners distillates.

Given the absence of gluten in its composition, it is used for the realization of many recipes for foods suitable for coeliacs.
The stigmas of the corn plant are used in herbal field for the preparation of infusions with diuretic effect also to counter urinary tract problems.
Its use in non-food field sees it as protagonist also in the production of bi mater, a bioplastic produced with vegetable components including corn starch: it is used to realize crockery and packagings.
The advantage of this material is its complete biodegradability, indeed it can be disposed as organic waste.

Maize is an extremely versatile cereal but, moving towards organic farming, it protect us from the risk of buying it genetically modified, indeed it is an elective plant for this type of biotechnology.

Choose organic as always ... is a guarantee!