Pay Attention to the Eggs Label 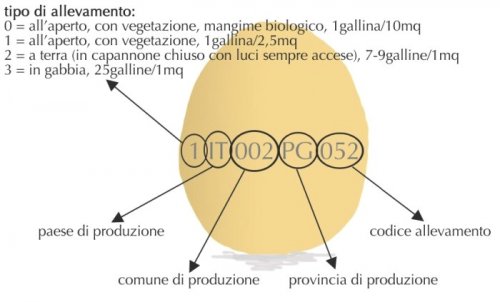 Since the beginning of 2012 the European Union has banned very small cages for laying hens. But not all farmers have adapted to the detriment of animal welfare ... and at the expense of the citizens.

Directive 74, issued by the EU in 1999 on the subject of intensive rearing of laying hens, was intended to ensure the birds an improvement in their conditions of life in the battery. However, we see that it is not a sufficient measure or resolution: just to start, wouldn't it be better to remove the cages?

Currently, those of the old type, with the size of an A4 sheet and placed on lines of 6 floors, with ventilation and forced artificial light to increase production, do not leave enough space to move around, spread their wings, scratch or roll on the ground. This completely unnatural life causes to animals a range of diseases such as osteoporosis and deformation of the limbs, but not only: many become aggressive up to the madness, and it is not uncommon to experience cases of cannibalism that farmers prevent by cutting them their beak at an early age, without anesthesia. Hence the enviable routine of our eggs machines...

The new cages sought by Directive 74, known as "modified" or "enriched", shall be at least 45 cm, each hen has 750 cm of soil available, at least one nest and two troughs, 15 cm perches, 12 cm in the manger, a litter for scratching and devices for shaping the nails. More space, therefore, also between each row of cages, among which there must be at least 90 cm, 35 between the floor and the cages below.

In late January, the EU has attracted 13 countries, including Italy, for failure to comply with the law. In Europe, 50 million chickens are outlawed, of which 20 million in Italy. The infringement procedure has already started and soon Italians will have to pay nearly 10 million euro plus the arrears. In addition to this, on the market there are eggs, irregular labeled, which could not be marketed, whose producers realize unfair competition to those who have adequate.
Last summer, in a letter to Agriculture Minister Mario Catania, the councilors of Piedmont, Lombardy, Veneto and Emilia-Romagna have requested an extension to 2014.

The mobilization of Lav

The Avl (Anti-Vivisection League) is already working to bring irregular farmers to court and to push for testing centers of packaging and packing of eggs. In addition, the Italian agency against vivisection denounced the rise of the eggs from cage, which are compliant with the Directive, estimated at around 70%.
The resistance of farmers is obviously economic: the eggs in battery cost less. Already in the sheds, and even worse outdoors, production is falling and you lose more eggs because they are broken, damaged or laid off from the nest. But the convenience of the producers should not come at the expense of the animals nor of the consumers: we must do something right now.

What to do
- Avoid eggs from cage
- Choose fresh pasta, mayonnaise, ice cream, dessert puddings, baked goods without eggs
- Prefer eggs from hens kept outdoors, preferably organic (even better if you can directly control where and how they live)
- Do not overdo consumption
- Dramatically reduce "unnecessary" uses (cakes, fresh pasta, binder for dough ...)
- Visit the site of the LAV www.gallinelibere.lav.it
- Ask the direction of the supermarket that in the products under their brand name the type of eggs used should be indicated

"We of the Vegan Living Project do not talk of improvement of livestock, but rather of their abolition: the animals are not to be enslaved, but they have to be left free to lead their lives," says Dora Grieco, underlining that in the intensive farming, laying hens can not even perform the behaviors required to give meaning to their lives like hatching eggs or living with their own families.
"Eating eggs does not kill animals: let’s dispel this myth " Dora piles it on. After two years of living in abominable conditions, the hens are slaughtered because now unproductive. Before that, however, the male chicks end up in the food processor because unnecessary. Not even organic farms are respectful, adds Grieco, who rather invites people in saving a hen from exploitation holding it in your own garden.

IT: country of production (Italy)
001: Common
VR: province
001: name or place of rearing
Type of Training:
0: from organic farming - the hens are entitled to an outdoor area of 4 square meters per rotation; in the halls there must not be more than 6 individuals per square meter, with perches, litter and nests
1: reared outdoors - as above, but without organic animal feed
2: Raised on the ground - in closed sheds (see organic)
3: caged - this number may hide illegal eggs
2 / *** - expiry date (optional)

Info: The numbers
40 million of laying hens: Hens in Italy (2nd European producer)
220 eggs: the estimated annual consumption for each Italian. Over 50% of the eggs are eaten directly, while the rest is consumed in food derivatives such as pasta, ready-made sauces, confectionery products and so on.
Info - Adopt a chicken
Only hens that roam outdoors can offer nutritionally valiant eggs, with more vitamins A, E, D, B12, beta-carotene and folic acid, and a better balance of omega 3 / omega 6 (if in excess, they are inflammatory). On the web there are several sites where you can adopt a chicken, even at a distance, as www.stilenaturale.com