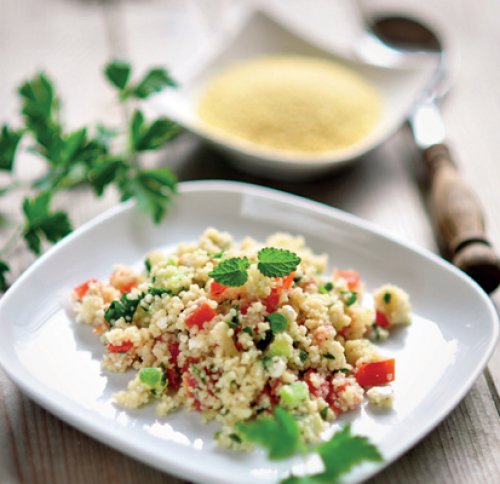 BIA: Did you know that the good Cous cous is an Italian tradition?
The couscous is a food typical of western Sicily and North Africa, consisting of grains of steamed semolina (of a diameter of a millimeter before cooking).
This dish is the traditional food of the entire North Africa, it could be even called "national dish" of the Berbers. In addition to the Maghreb, it is very common in West Africa, France, Belgium and even in the Middle East: in Jordan, Lebanon and Palestine is called maftl (twisted).

In the African tradition, couscous is eaten all sat together around a large round plate, from which all the diners draw.
The couscous in Sicily, is mostly prepared in Trapani and from there led to Livorno and Genoa, steamed with a holed pot of glazed earthenware.
But the seasoning, unlike in the Maghreb, is the "Ghiotta", a fish stew mixture of red rockfish, black rockfish, grouper, John Dory, Vopa, gurnard, luvaro eel and the salt mines of the area, along with some shrimp or escape.
Another Sicilian version is the "Frascatuli", balls of kneaded flour, along with fish broth or soups, broccoli, chickpeas and vegetables. This dish also exists in Sardinia, cooked the same way and called "Fregula."
When you eat couscous in Sicily it is said that "one should not drink water because the bran inflates the stomach" and often you hear people exclaim: "Sugnu appanzatu: manciai cuscusu!" ("I am weighed down, I ate couscous").
(from the book by Clara Salvo, The flavors of the couscous. History, traditions, recipes. Coppola Editore, 2011).

In fact, according to someone it is believed that the couscous would
"clean" the gut: for this reason it was offered to the children and the sick. The couscous of Trapani is inserted between the traditional Sicilian food products recognized by the Ministry of Agriculture, Food and Forestry, on a proposal from the Sicilian Region.

It is known that Cous Cous Fest is very famous, it takes place for sixteen years in September through the streets of San Vito lo Capo, involving in its festive atmosphere all the countries of the euro-Mediterranean area. The international culinary competition is the central moment of the event and brings together chefs from all around the world.

Couscous as well as all other cereals, has complex carbohydrates and B vitamins, nutrients that release energy slowly, the dish is nutritionally complete when accompanied by beans and vegetables.
The cous cous of Probios is produced by Bia, which since 2004 manufactures the widest selection of Italian organic cous cous, thanks to the experience that combines tradition and innovation. You can thus enjoy traditional durum wheat cous cous, the tasty spelled or kamut couscous which are highly digestible, the delicate corn or rice couscous.

But how is cous cous prepared?
The production process begins by mixing the raw material with water; subsequently the couscous is precooked by steam and dried at high temperatures, and finally is divided depending on the particle sizes and left to cool for a few minutes before passing to the phase of packaging in bags, boxes, bags, etc. ...
The result is a product exceptionally easy to prepare, with complete nutritional characteristics, which makes it suitable for all age groups.
It is possible to prepare both with cold water, for the preparation of salads and tabulé, and with hot water to traditional recipes.

Also this year Bia is the Official Sponsor of the Cous Cous Fest, to be held in San Vito lo Capo from 24 to 29 September 2013, and looks forwards to seeing you at its booth to learn about the variety of its offer!
www.biacouscous.it